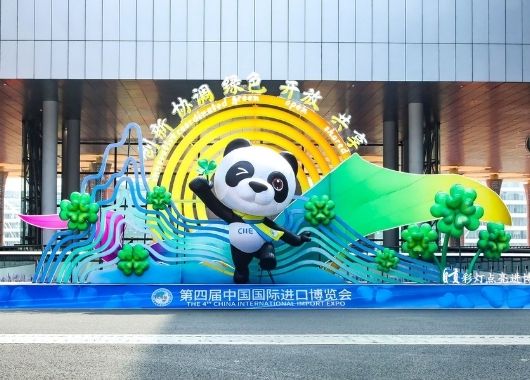 The 4th China International Import Expo (CIIE) was held from November 5 to 10 in Shanghai with the number of participating countries and companies surpassing that of the third annual expo. According to the Global Times, the CIIE is the world’s first national-level import exhibition and an innovation in the history of global trade. Nearly 3,000 exhibitors from 127 countries and regions participated in the fourth edition of the Expo, according to the CIIE Bureau. According to a catalogue of exhibitors, Japan fielded the largest number of companies with a total of 289 exhibitors, while the U..S. sent 185 companies to the Expo. Germany fielded 167 exhibitors and Russia sent 42 companies. Last year, tentative deals for one-year purchases of goods and services at the CIIE totaled more than USD72 billion, up 2.1% from the second edition of the Expo, despite the impact of the pandemic, according to the CIIE Bureau.

Chinese President Xi Jinping opened the 4th CIIE with a keynote speech that underlined China’s unswerving commitment to further opening up its market and helping to boost global cooperation, as the world faces rising protectionism and other challenges. Xi pledged that China will firmly safeguard true multilateralism, share market opportunities with the rest of the world, promote high-standard opening-up and uphold the common interests of the world. “The opening-up measures unveiled at the third CIIE have been basically implemented,” Xi said.

President Xi announced that China would further shorten the negative list for foreign investment, and release a negative list for cross-border trade in services in the pilot free trade zones. China will also deeply engage in international cooperation on green and low-carbon development and the digital economy, and actively work to join the Comprehensive and Progressive Agreement for Trans-Pacific Partnership and the Digital Economy Partnership Agreement.

This year also marked the 20th anniversary of China’s accession to the World Trade Organization (WTO) and China has fully honored its commitments to the multilateral trade body. Over the past two decades, China has become the world’s factory, the largest trading nation in goods, and the second-largest consumer market.

“The holding of the CIIE demonstrates that China honors its commitment to high-level opening-up and sharing development dividends with others to shore up globalization,” said Zhang Yansheng, Chief Researcher at the China Center for International Economic Exchanges. “The world is in urgent need of more trade orders and increased demand to revive the economic recovery, as well as communications to reach consensus and find more effective ways to combat the pandemic and repair global industrial and supply chains, and regarding both, the CIIE will play a vital positive role,” he said. Huo Jianguo, Vice Chairman of the Beijing-based China Society for World Trade Organization Studies, said China has made great achievements in expanding market entry, and as it vows to promote institutional opening up, the focus for the next phase will include increasing the transparency and stability of administrative rules and regulations. Huo said China needs to align rules and regulations on trade and investment with the high standards of the world.

At the new product release area, more than 60 exhibitors launched over 100 new products and innovative technologies. More than half of these products are being shown to the world for the first time. One of the most high-profile exhibits is from Swiss pharmaceutical company Novartis – a hyperlipemia therapy called Inclisiran that lowers cholesterol levels. Patients only need two doses of Inclisiran a year.

The Global Times observed that the fourth CIIE could be summarized as “three more’s” – more green, as almost all the exhibitors have showcased what they can do to help achieve China’s carbon targets; more interesting, as the CIIE has not only become a platform for making deals, but for showcasing foreign companies’ concept ideas and culture; and more stringent, as the pandemic-prevention measures taken at this year’s CIIE are even stricter than at last year’s event.

This overview is based on reports by the China Daily, Global Times and Shanghai Daily.